A tale of two North Sydneys

Did you know there’s another North Sydney, over 17,000kms away on the east coast of Cape Breton in Nova Scotia, Canada? northsider got in touch with two locals to find out what life’s like in our twin town…

“There’s always a connection to someone”

Melissa Ingliss is a marketing professional for a local corporation in a First Nations Community called Membertou First Nations.

I was born and raised in North Sydney and apart from moving away for university, I’ve always lived in the community. My husband Mark and I live in a Cape Cod-style home located on a street with only six other houses. It’s on top of a hill that overlooks the beautiful North Sydney harbour and is surrounded by a large field. We can see and hear the Marine Atlantic ferry, which is one of the only ways to get to Newfoundland, from our bedroom windows.

We’ve all heard of seven degrees of separation, but in North Sydney it’s rarely more than two! There’s always a connection to someone. Everyone gives back to those who need it most and you find joy in the simple things - the bite of a sandwich from your favourite deli, watching lobster boats setting traps on the harbour and spending time with family and friends. North Sydney is where I feel most at peace and where I call “home.”

Melissa and her husband Mark 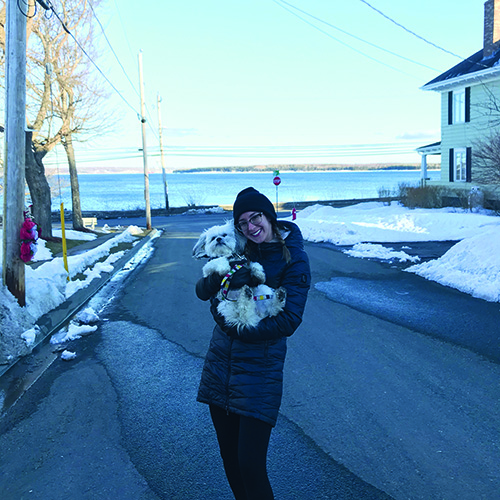 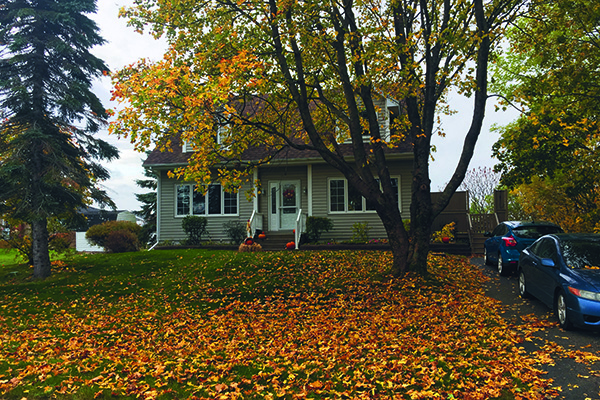 From -20°C, 100km winds and 30cm snow days, to 30°C sunny days, all depending on the time of year. Our Spring is cool and rejuvenating, watching flowers bloom and trees come back to life, and then in an instant, we have sweltering days perfect for the beach. Fall is crisp and beautiful with rolling hills of orange, yellow, red and brown cascading around our small town.

Fishing is a big part of people’s livelihoods and you can buy fresh lobster right off the dock.

We have plenty of ice in our harbour from November to April and sometimes even May. Locals call the large chunks ‘Ice Clampers’ and our ancestors would jump from clamper to clamper before it was deemed too unsafe! In the 1950s through to the 1960s, people would walk across the harbour when it was frozen solid. Today’s harbour is littered with lobster fishing vessels in Spring and sailing boats from late Spring until early Fall. The most recognisable vessel in our harbour is the Marine Atlantic ferry. 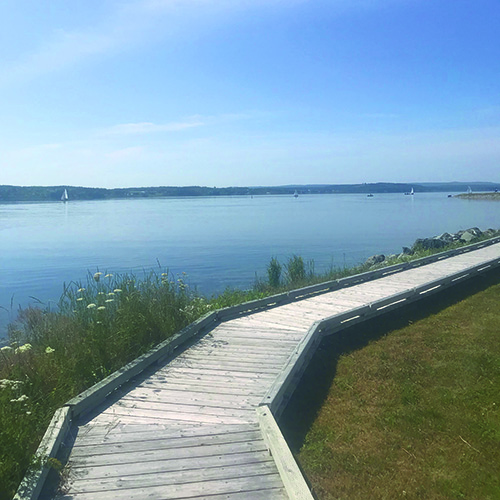 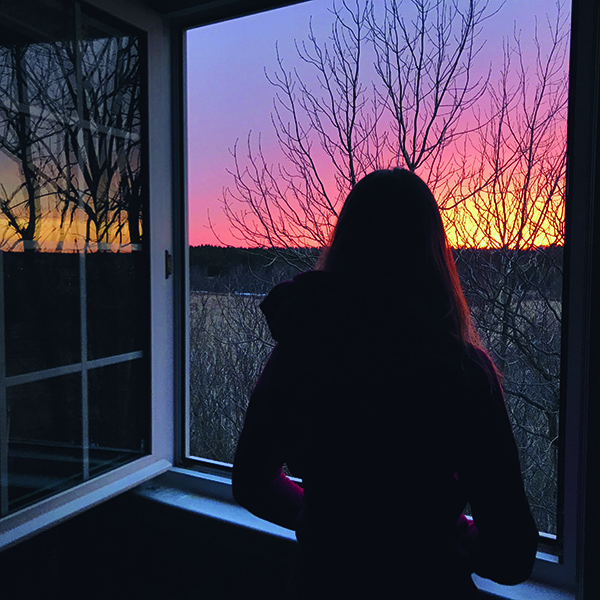 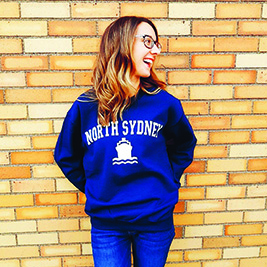 Melissa has lived in North Sydney her whole life.

Ice in the harbour

“I will forever call it home” 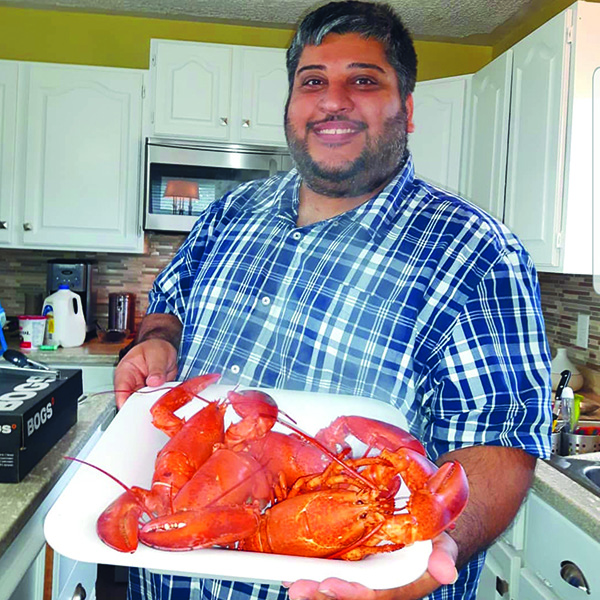 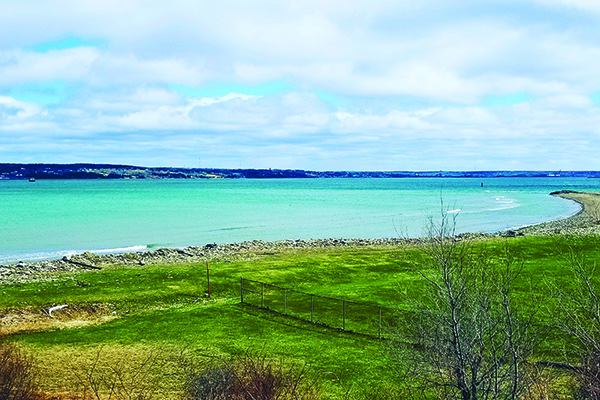 Rahim with a haul of local lobster, views of North Sydney

I was born and raised in Toronto, Ontario. I went on vacation and met a couple from Cape Breton who invited me to visit. I immediately fell in love with this beautiful island and a few years later, I made the decision to move here. It’s been one of the best decisions I’ve made in my life. I live in a beautiful three-bedroom, two-bathroom home that backs out on to the beach. The back yard has a gorgeous ocean view.

I’ve travelled a lot but North Sydney, and Nova Scotia as a whole, are among the friendliest places I’ve ever been. The people are genuine and kind. Everyone is welcomed with open arms and like long-time friends or family. It’s very rare to pass anyone without being given a wave, a smile or a friendly hello. In North Sydney, I’ve found a beauty and peace that cannot be matched. I love it and will forever call it home.

On a beautiful Saturday, I’ll get a van load of friends and family and anyone else who wants to join. We’ll start the day, same as every Canadian, with a stop to Tim Hortons (a coffee shop). Then we’ll head up the Cabot Trail. I’ll have a cooler or two packed with goodies and drinks to eat and sip along the way. We’ll stop at all the lighthouses, beaches and lookouts. Maybe we’ll haul out the fishing rods and try our hand at catching an afternoon feed. I’ll probably end the day at a local pub or restaurant with live entertainment or even a karaoke night. A “kitchen party” at one of the van members’ homes would tie up the evening.

The island is very inclusive and most signs are written in English and Gaelic as well as some in Mi’kmaq, as a large population of the island are Indigenous.

Indian Beach is located right beside the Newfoundland ferry. You can enjoy live music there every night in Summer and throughout the day people enjoy walking along the sand, sunbathing and searching for sea glass and seashells.

Cape Breton is well known for the Cabot Trail, a beautiful landscape drive with many attractions including waterfalls, ocean view lookouts, parks and the Skyline Trail hiking route. It’s not uncommon to spot moose, foxes and other animals. In Sydney, 21kms away, you’ll find the 70ft Big Fiddle at the harbourfront, which is a tribute to the area’s traditional fiddle music, as well as a lighthouse trail, boat trips to Bird Island to see the puffins and whale watching tours.

A historic picture of Rahim’s house from 1918

Rahim's house on the harbour

Once upon a time…